Palle Johansen and his team took care of most of the hard work restoring the car in Denmark. In early December 2012 the car was - as planned - put in a container along with the printed books and shipped to California. Here David Martinez would do some finishing work on the car to get it at its best to be shown to the visitors at the show and to to Jack Stewart who was very anxious to see his old custom being brought back to the looks it had when he drove it in 1951.

The first plan two years ago,was to completely finish the car, paint and all, and ship it to the GNRS. But once the car was stripped from its 1972 paint job a wonderful bare metal and lead custom sculpture was revealed. It was then decided the car should be show in bare metal so that everybody could see the great workmanship from the Ayala brothers in the late 1940's and early 1950's as well as the fine tuning work of George Barris who did the finishing work on the car for his friend Jack Stewart in 1951.

Before we left for the GNRS the team had created some large 3-D "Jack Stewart" letters copied from the 1951 Hot Rod Show display. We also made some framed display signs and Palle had a series of stitched patched made from my Jack Stewart Ford Project logo artwork.

This last decision was welcomed by a lot of custom car enthusiast who came to see the car in person at the show. Through out the whole show the car was mostly surrounded by people admiring the metal work done 60 plus years ago. Never before was such an iconic Custom Car built by both the Ayala and Barris shop displayed in bare metal.

The highlights at the GNRS for the Jack Stewart Ford Project team was when Jack Stewart and Bob Drake inspected the car. It was the first time that the original owner of the car Jack Stewart and the fourth owner of the car Bob Drake met in person. Both had very emotional moments when viewing the car in bare metal for the first time. Bob had traveled all the way from Indiana with the help of his daughter Tanya. Both talked in length with each other and shared many personal moments they have had when they owned the car. Both Bob and Jack spend all three days signing copies of the Jack Stewart Ford book, and talking to people who wanted to know more about the car.

A personal highlight for me was when I presented Jack Stewart with my book during set up day on Thursday. Jack had been so kind to wait receiving the book until I could personally hand him a version at the show. He kept looking in the book, and each page he opened and each photo he saw a new story about the car and the time was shared. It was an absolutely great day that will never be forgotten.

I had never before had a booth at a show like this so I had no idea what to expect. I had, as on previous times when I visited this kind of show, brought my photo camera and try-pod to make as many photos as I could. It turned out that I was so busy during the entire weekend selling books and talking to the people that visited our booth that I did not even have the time to visit every building at the show, let alone take photos of all the cars I liked.
The book sales started already on set-up day when people came over to ask about the book. And the rest of the weekend there were always people getting a signed copy of the book right there and some even traveled from far with the previous acquired books to have them signed by Jack, Bob and Palle.

The Jack Stewart Ford book is available directly from the publisher at: www.kustomkarbooks.com 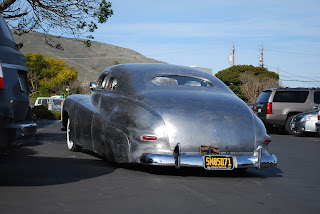